Current projects in our lab investigate thalamo-cortical interactions during: 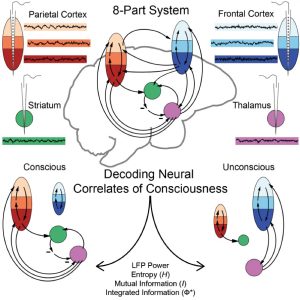 Background: Information from the world around us is first transmitted to our cerebral cortex via the primary sensory, or first-order, thalamic nuclei. Higher-order thalamic nuclei, like the pulvinar (PUL) and mediodorsal nucleus (MD), receive relatively little input from the sensory periphery and instead form pathways between cortical areas, which can strongly influence cortical activity from sensory to prefrontal cortex (PFC). These cortico-thalamo-cortical pathways are ideally positioned to regulate communication between cortical neurons. 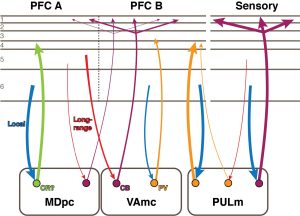 To realize this vision, we combine three main methodological approaches:

The significance of this research is that it advances our understanding of fundamental cognitive processes, particularly how information is coded and flexibly transmitted in brain networks. Disruption of brain networks lies at the heart of many disorders, e.g., schizophrenia, Alzheimer’s disease and coma. Our research is an essential step towards effectively treating such disorders.